The exact date when bell ringing was started is not known. The oldest bells in the tower were installed in 1674 so presumably there were people ringing them then. The oldest bells were cast by Richard Keene of Woodstock. There were four bells originally, the frame was then converted to accommodate a fifth bell in the early seventeenth century and again later that century to make the ring up to 6 bells. These later bells were cast by Chandlers of Drayton Parslow and the Whitechapel foundry.

The ringers gallery was also installed in the tower in the seventeenth century by the Rector Richard Duckworth who was a famous and skilled bellringer and was installed Rector on 30th March 1680, he also wrote 'Tintannologia', the first ever book on The Art of Ringing. With such an influential ringer here and the fact extra bells were installed ringing must have taken place. 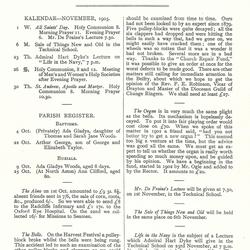 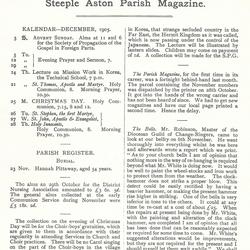 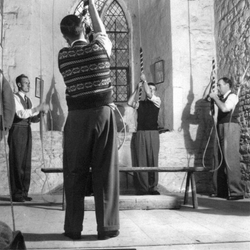 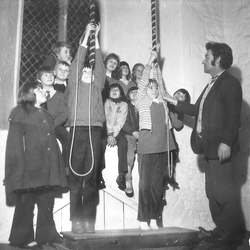 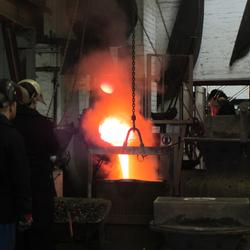 The bells and frame were completely removed from the tower in 1986 for restoration. A new cast iron frame was installed lower in the tower and the bells augmented to 8 with 2 more bells cast at the Whitechapel foundry.

The first recorded names we have are from 1930 when the tower became affiliated to the Oxford Diocesan Guild of Ringers. Mr T Kirby took over as Foreman after the war in 1946, succeeded by Harry Adams in 1956, Ron Gardner in 1979 and Graham Clifton, our present Tower Captain in 1987

The first recorded full peal on the bells was rung in 1951 for the Festival of Britain. Other peals have been rung to mark the centenary of Sir Winston Churchill's birth, the Queen Mother's 100th birthday, the centenary of the Village Hall, The Queen's Diamond Jubilee, bellringers weddings and other celebrations. More recently the birth of Prince George in 2013 was celebrated by the bells being rung minutes after the announcement of his birth.

In 2012 it was necessary to replace the Tenor bell, and a committee made up of bellringers and led by Graham Clifton managed to secure, with the help of fundraising, generous donations and grants, the amount required to purchase a new bell. The old bell was taken down on 7th March 2012 and transported to Whitechapel foundry to be traded in against the new bell. The old bell was broken and melted down to form part of the metal needed to cast the bells which were used on the Royal Barge for the celebration of the Queen's Jubilee in 2012. The new bell was cast watched by bellringers who had made the trip to Whitechapel and eventually the bell was delivered to Steeple Aston on 11th March 2012 and hung in the tower by Graham Clifton and a group of willing volunteers and watched by many spectators from the village.

In 2021 the third bell, cast by Richard Keene in 1674, was replaced by a tonally superior bell from St Michael and All Angles church in Ledbury, Herefordshire. It was cast by Abraham Rudhall of Gloucester and bears the inscription "WILLIAM ; WINTER ; OF ; DIMOCK : ESQ 1690. RECAST 1929 ; OLIVE ROSA OAKLEY : Mears & Stainbank, London. " It was fitten on 17th April 2021 by Graham Clifton, Nick Powell, Lawrence White, Heith Thomas and Jack Knowles.